The 2022 Iceboats US Nationals are currently being held in place of the 2022 North American Championship, which was cancelled because of the pandemic. Six Canadians are competing. “On DeckÛ conversation with an iceboat racer who was a medalist in sailing at the 1963 Pan American Games: AndrÌ© Baby. 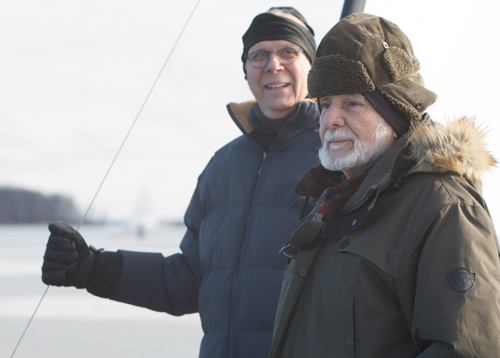 What do you remember the most from the 1963 Pan American Games?

Sailing was held on Lake Guarapiranga, near Sao Paulo, in Brazil. IÛªll never forget the opening ceremonies held in the cityÛªs soccer stadium, where 60,000 spectators cheered us on as we entered with the rest of the Canadian contingent. Standing on the podium to receive my bronze medal was also an unforgettable moment.

Can you tell us how you won that bronze medal?

We were sailing on Lake Guarapiranga, which was the area where the Brazilians sailed all the time. They definitely had the home club advantage, as the winds were very light and shifty, and they played the shifts well. We had trained mainly for heavy weather and had practiced fast tacking and jibing, so we were a bit disappointed with the light air, where fast boat handling was not as important. The Brazilians won the gold, while the Americans, Pat Duane and her husband John, won silver. The Mexicans were behind us in fourth. 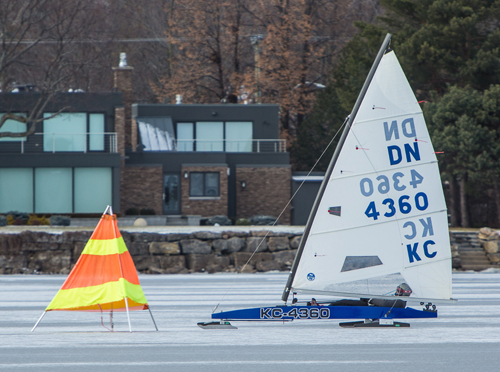 In terms of your sailing career, what did you do following the 1963 Pan American Games?

I continued to race in various Flying Dutchman regattas, then other classes including Dragons and Y flyers. Eventually, I bought and campaigned a Kirby-25.

I started in 1988. Fellow Flying Dutchman sailor Hans Huber thought that since I enjoyed the thrill and speed of the Flying Dutchman, I should give iceboating a try. He generously lent me his DN and after sailing it for 10 minutes, I came back and said “OK, where do I buy one?”.

How did you manage the transition from sailing to iceboat racing?

There was a good size DN iceboat fleet in Montreal, so I joined them and began racing. I quickly found out that although there were similarities with summer sailing, I had a lot to learn about racing iceboats. I found it challenging at first to find the DN iceboatÛªs tacking and jibing angles, and also to get used to sailing with the apparent wind, like foiling boats today. Campaigning my DN in Europe as well as the US helped me improve my racing skills.

Except for the season and the ice, what are the major differences between sailing and iceboating?

The main difference is the speed. While a planing Flying Dutchman or 49er can reach speeds of say 40 km/hr, a DN iceboat, due to the lack of resistance, will do over 100 km/hr, up to four-five times wind speed.

What are the similarities between sailing and iceboating?

The basic principles are the same: your propulsion is your mast and sail, so they both have to be tuned together to achieve maximum results. Also, tactics and strategy are most important.

The sheer exhilaration of being propelled at such speeds by the wind alone never ceases to amaze me.

What is the maximum speed that you have reached in iceboat racing?

How much does it cost to start racing an iceboat?

Where could someone who is interested in iceboating try it out?

The best way is to join a group, such as the Montreal Iceboating Association (see our Facebook page), or the Kingston Iceboating Group. For obvious safety reasons, this is not a sport you want to try or practice alone.

Do you still go sailing in the summertime?

Absolutely. My wife and I used to sail a J-40 and we now enjoy our Nonsuch 22 on Lake St-Louis near our home in Pointe-Claire.